Juneteenth and the Black Culture of Architecture

“The people of Texas are informed that, in accordance with a proclamation from the Executive of the United States, all slaves are free. This involves an absolute equality of personal rights and rights of property between former masters and slaves, and the connection heretofore existing between them becomes that between employer and hired labor. The freedmen are advised to remain quietly at their present homes and work for wages. They are informed that they will not be allowed to collect at military posts and that they will not be supported in idleness either there or elsewhere.”

Until very recently, June 19th was not a date that I was aware was important.  It was not taught to me in the myriad of American History classes I took in high school. It was not introduced in discussions of slavery or the Civil War.  It was nothing I had ever heard of.

And this is not surprising to me.  It is, however, unfortunate.

There is a supreme lack of attention paid to Black history and culture in our schools and I hope that this is something that will soon change.  American students are being deprived of a large swath of our nation’s story because of a self-perpetuating system of ignorance.  No, not every teacher in the world who omits these facts is racist.  I would hope that the number of racist educators in the world is very small.  But when the teachers are not taught the information, that information rarely gets passed along to the students.  And as such, there has been a repeated cycle of omission resulting in a nation-wide ignorance of some very important and relevant pieces of history.

Self-education is the most important thing right now.  Going beyond the books we read in school and seeking out information is the only way we will get the whole story or at least a larger picture of it.

So today we celebrate June 19th, or Juneteenth.  We look upon this date as the end of slavery in the United States: albeit 2 ½ years after the Emancipation Proclamation. Because on June 19th, 1865, Texas accepted the proclamation thus becoming the last state to end slavery.

Here at Mitchell Wall, we are looking at Juneteenth as a way to further educate ourselves and those who we touch on a daily basis on the importance of Black influence in design.

Architecture is a field that is sparsely populated by Black practitioners.  Of the 113,000 licensed architects in the United States today, Black architects represent just about 2% of that number (with Black women being 0.3%).  Personally, we find this to be very unfortunate.  Black Culture has lent itself to every other artistic field in profound ways.  Music, of course, being the most obvious example. However, when one begins to look at the history of architecture, it becomes apparent that the influence of Black men and Women has been there all along but much like every other field, their names have been tucked into the shadows while white practitioners took center stage.

Today, on Juneteenth, we would like to take the opportunity to explore the Black Community’s contribution to architecture and related fields.  If we can reach even one Black man, woman, or child and show them the glorious possibilities of a life pursuit in design, we will consider this post to have accomplished our goal.  If we can educate one person to the impact Black people have had in design, we will be satisfied in the result.

Let us all work together to elevate one another until we are all, ultimately, living eye to eye.

Mr. Abele has an incredible legacy of design and yet spent his entire career hidden in plain sight.  As the chief designer for Horace Trumbauer, a legendary Gilded Age architect, Mr. Abele was responsible for such seminal works as The Philadelphia Museum of Art, numerous mansions across Newport, and he designed the layout for Duke University’s gothic revival campus (even though at the time, Black people were not permitted to attend).

Julian Abele was the first Black person to graduate from the University of Pennsylvania School of Architecture.

Mr. Tandy was born in Lexington, Kentucky in 1885. He was truly a pioneer.  Not only was he one of the founders of Alpha Phi Alpha (the first Black fraternity in the Nation) he was also the first Black person to be a member of the New York National Guard during World War I.

But that was not the limit of his contributions.  Mr. Tandy created some of the best known and beloved works of architecture in New York City.  He was one of the first Black members of the American Institute of Architects (AIA) and he was eventually established as “Harlem’s most distinguished architect.”  He was even given the commission to design the Liberian Building for the 1939 World’s Fair in NYC.

Works like Saint Philip’s Episcopal Church and the Ivey Deloh Apartments in New York are among the many works that bear his name as designer.

However, his most famous commission was the Villa Lewaro.  This was a palatial suburban estate of the country’s first Black female self-made millionaire, Madam C.J. Walker. 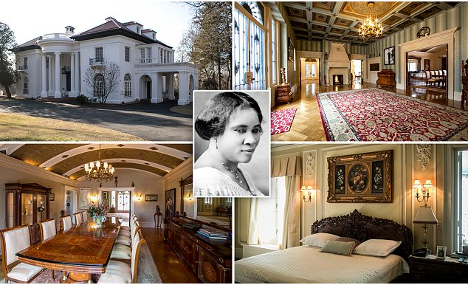 Born in Chicago, Ms. Greene would go on to create a very impressive resume working with some of the biggest names in modernism.

Her first job was working for the Chicago Housing Authority but due to the fact that she was struggling to find work, she eventually moved to New York where clients seemed more amenable to a Black woman architect.  One such project was an assignment was designing the Stuyvesant Housing Project.

As her career progressed, Ms. Greene would partner with such greats as Edward Durell Stone and, later on, Marcel Breuer with whom she would design the UNESCO Headquarters in Paris.

Mr. Williams was an architect much like I am.  He specialized in custom residential design spending a large portion of his career designing Spanish Colonial and English Tudor houses in and around the Los Angeles area. He worked with such famous names as Lucille Ball, Frank Sinatra, Desi Arnaz, Martin Landau, and Bill “Bojangles” Robinson. And while his homes are lovely, Williams made his biggest mark on the architectural community with his Googie “Theme Building” at the Los Angeles International Airport.

Another one of his projects was an extension to the Beverly Hills Hotel, which, due to the color of his skin, he was not allowed to visit without the owner of the hotel escorting him.

Williams also taught himself to draw upside down because he did not want his white clients to be uncomfortable sitting next to him when reviewing plans.

When he was posthumously awarded the AIA Gold Medal in 2017, he became the first Black person to receive the honor.

These are, obviously, only four examples of Black architects who have profoundly impacted the world around them.  But there are many more. And while historically Black Americans have been under-represented in the profession (and under-credited), it is our hope, my hope, that with education and presentation of the opportunities available in the world of design, we will soon begin to see many many more.

How to Go Into Residential Architecture

Residential architecture is a highly rewarding field (though admittedly, we may be a bit biased on that front). And unsurpri ...

Designing and constructing a custom home takes a lot of work and collaboration from a number of different people with indivi ...

How to Find an Architect to Design Your Home

Building your dream home from the ground up is an exciting (and sometimes stressful) period for any homeowner and knowing ho ...

What Is Residential Architecture?

Residential architecture is, quite simply, the process of designing and building residential, non-commercial properties and ...

The struggle to design a custom home is always its most strenuous at the beginning.  When staring at a blank piece of paper ...